Learn more about these FGSS Fall 2021 gateway courses that are available to first-year and sophomore class students:

Course Description
Feminist, gender and sexuality studies is an exciting interdisciplinary field that addresses gender, sex, and sexuality as well as related issues of race, class, nation, and citizenship across multiple disciplines, epistemologies, methods, and vantage points. At its most fundamental, the field addresses how persons are identified and identify themselves as similar to and different from each other and the relation of these categories of difference to power relations. The study of feminist and queer thought on sex/gender and sexuality offers a critical lens through which to examine social structures and social problems, inequality, difference and diversity, identity and the self, belonging and community, and the possibility of social change, among other topics. This course will offer a broad introduction to the field and provide a foundation for further study of specific areas of interest. The primary goals are to (1) explore the multiple ways feminist and queer scholars have understood sex, gender, and sexuality; (2) explore different methods and styles of feminist thought and expression; (3) situate these in time and place, with attention to historical and cultural contexts; and (4) explore the intersections of sex, gender, and sexuality with race, nation, and other categories of difference. The course will cover aspects of first-wave feminism (e.g., suffrage and the abolitionist movement); second-wave feminism and critical theories of sex/gender; and contemporary feminism, including queer theory, intersectionality and race, and transnational and postcolonial feminism. 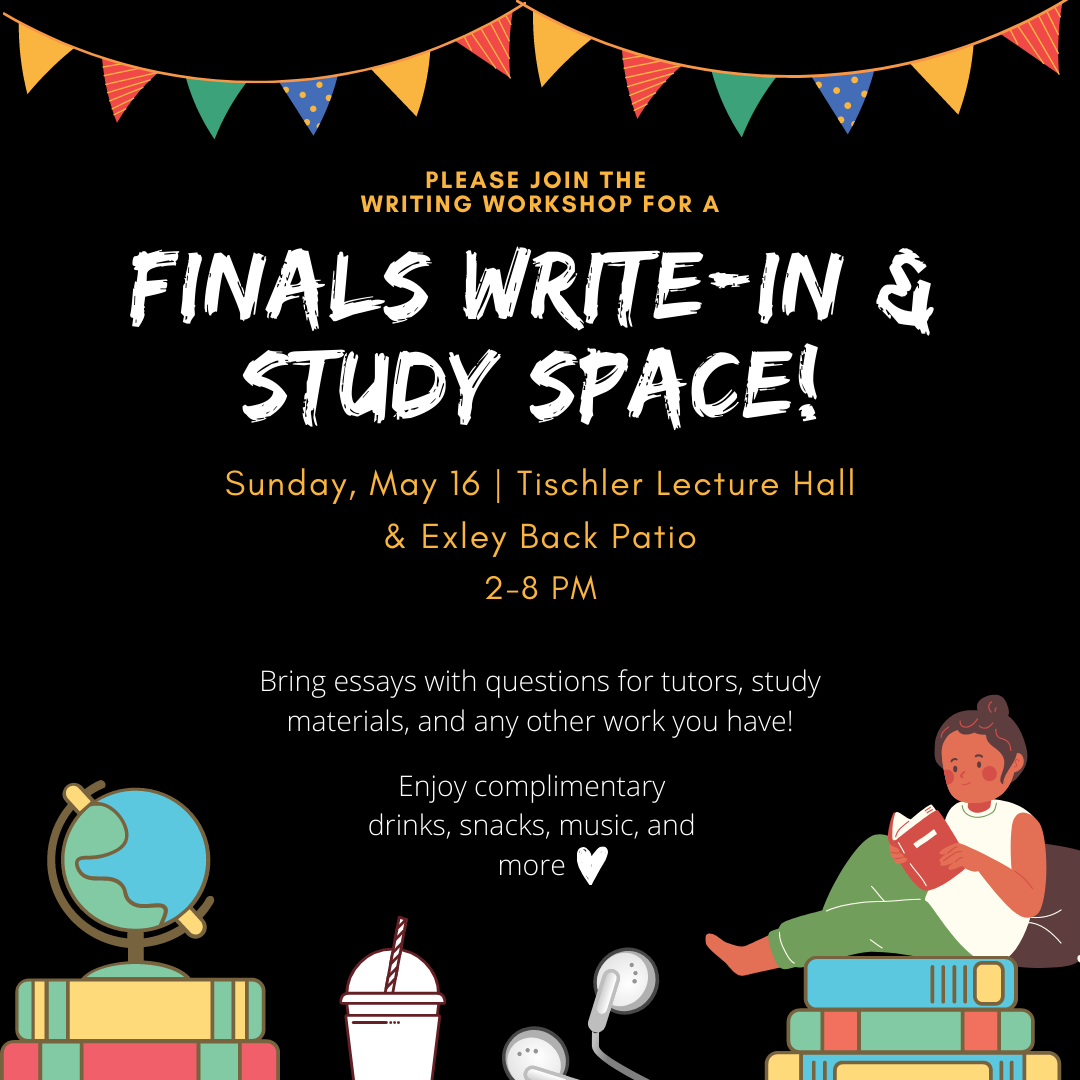 Join the Writing Workshop for our first ever Finals Write-In + Study Space! On Sunday, May 16th we’ll be in Tischler Hall (Exley 150) between 2-8pm. Stop by for the most productive afternoon of your finals season–and to make all this work a little less lonely. Writing Tutors will be available for drop-in sessions, and we’ll have plenty of free snacks and stationery to go around. Be one of the first 5 to RSVP and we’ll have a goodie bag for you to pick up on the day-of!

If you can’t come on Sunday, we hope you’ll still make a Writing Workshop appointment this Reading Period. Visit your Writing Workshop Account (WesPortal > Academics) for more details. Email writingworks@wesleyan.edu with any questions.

The deadline to withdraw from full-semester and second-quarter classes for the Spring 2021 semester is Wednesday, May 5, at 5:00 p.m EST. If you need to withdraw from a course, please send a group email to the instructor, your faculty advisor, and your class dean, and attach a withdrawal form.

If you are thinking about withdrawing from a course: 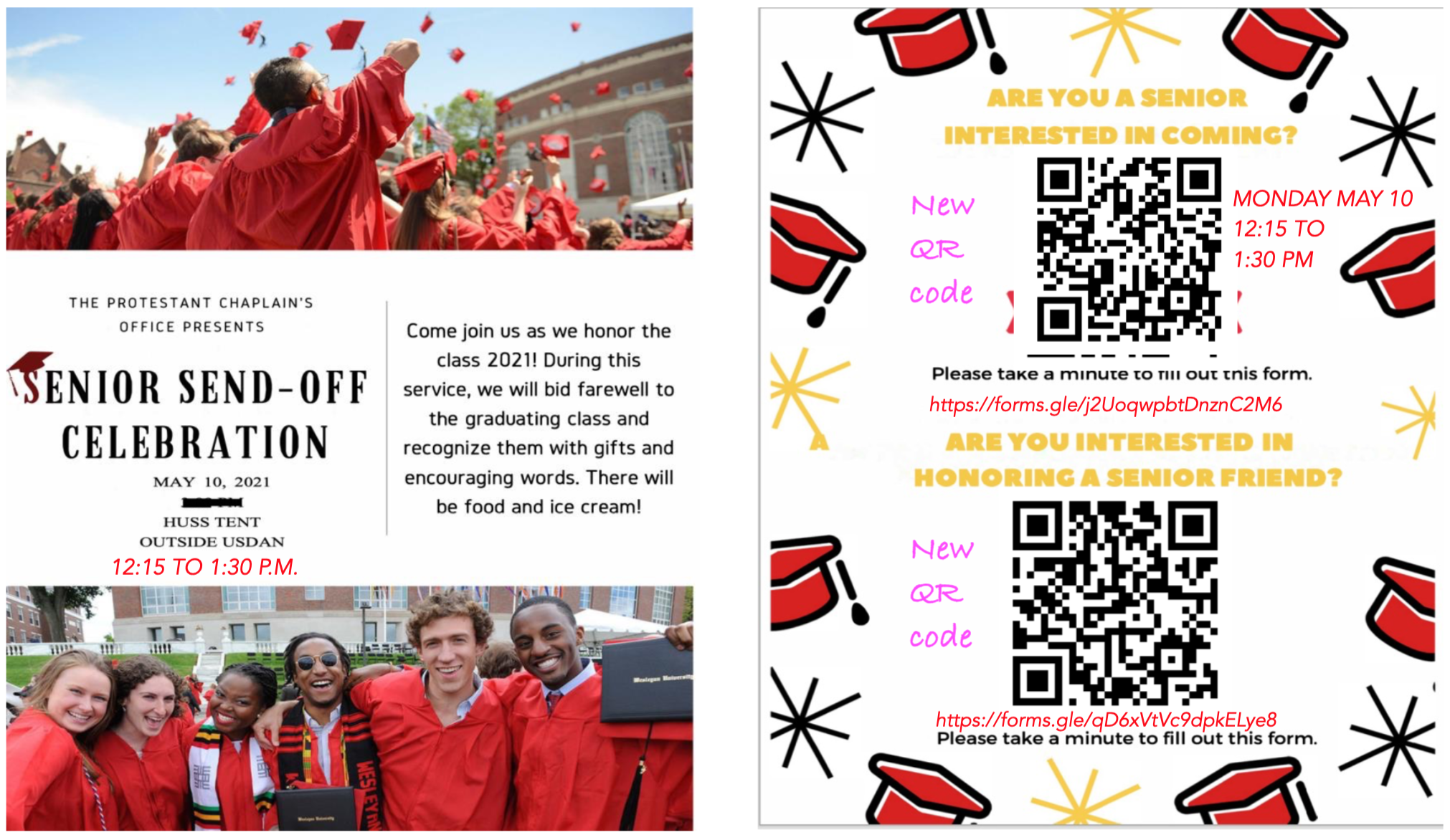 Hey, non-seniors!  Do you know a senior you’d like to honor with a few kind words? The Protestant Chaplain’s office is inviting you to attend the Senior Send-Off! Come celebrate the Class of 2021

Rising sophomores are especially sought for a new course on one of the greatest thinkers and writers in history, Dante Alighieri. On the 700th anniversary of his death, this course in history, medieval studies, and World Literatures in translation is open to all class years.

Dante has been famous since his life, especially for his poem “The Divine Comedy,” including its depictions of Hell, Purgatory, and Heaven. The book reveals his massive knowledge and his deep and complex commitments to love, hope, and the good. It might be less well known that he was also an active politician and a political theorist, as well as a student of literature and style.

This course will examine the body of his work and use it to outline some of the great political, moral, and religious crises of Europe around the year 1300, many issues that continue to today, such as the importance of ethical and political commitment and courage in public life, but also the dangers of false hierarchies and one’s own ego. Readings will focus on Dante’s own writings, including “The Divine Comedy,” “The New Life” and “On Monarchy.” 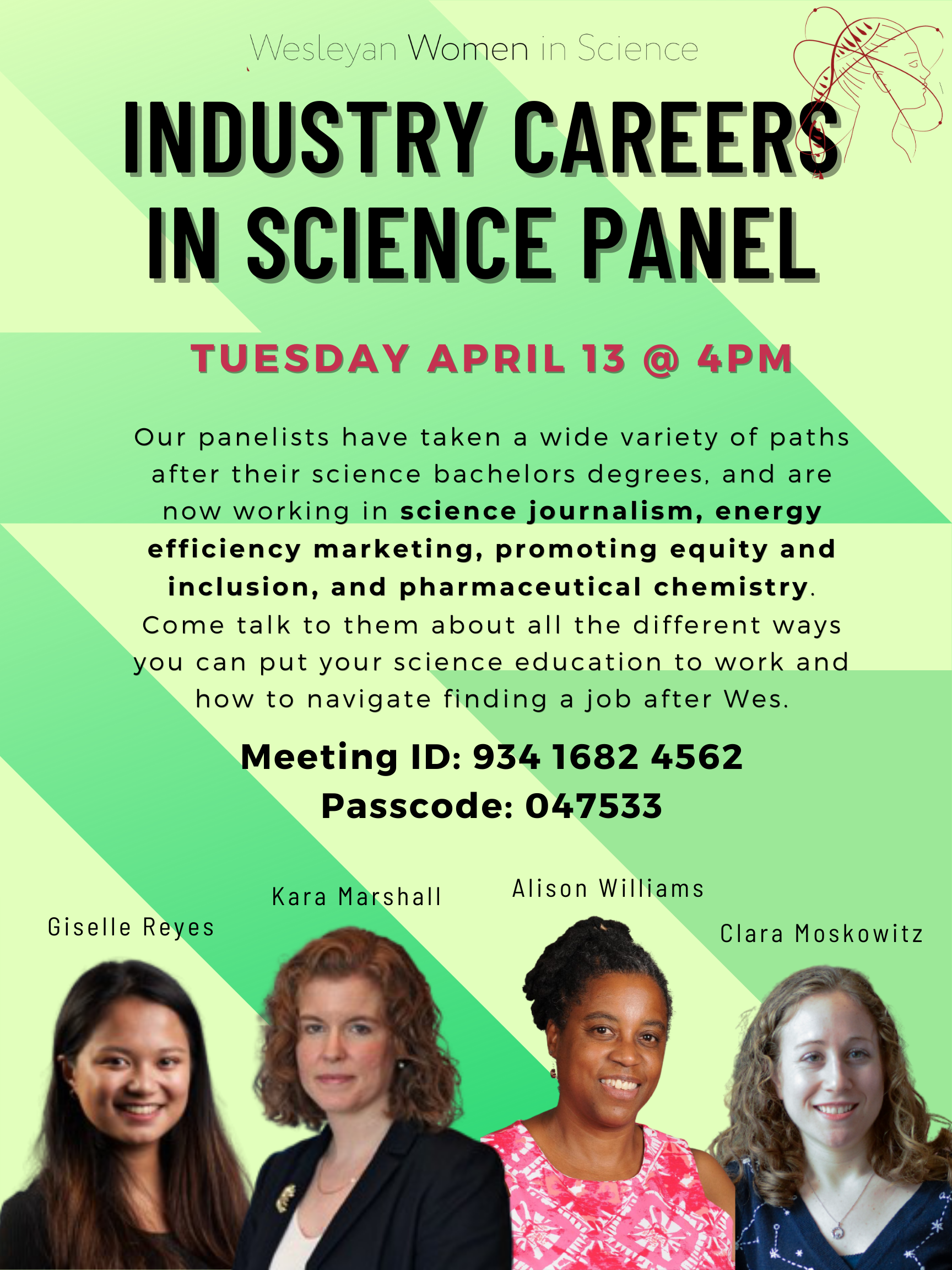 This Tuesday April 13, 2021 at 4pm, WesWIS is hosting an “Industry Careers in Science” Panel for undergraduates looking for an alternative to going to grad school right after Wes. All interested students are encouraged to attend!

The purpose of this meeting is to provide an overview of the major. Bring all your questions—and better assess whether this major might be right for you.

Reviewing the Psychology Majors Manual may be helpful:
https://www.wesleyan.edu/psyc/about/psychman_AY21.pdf 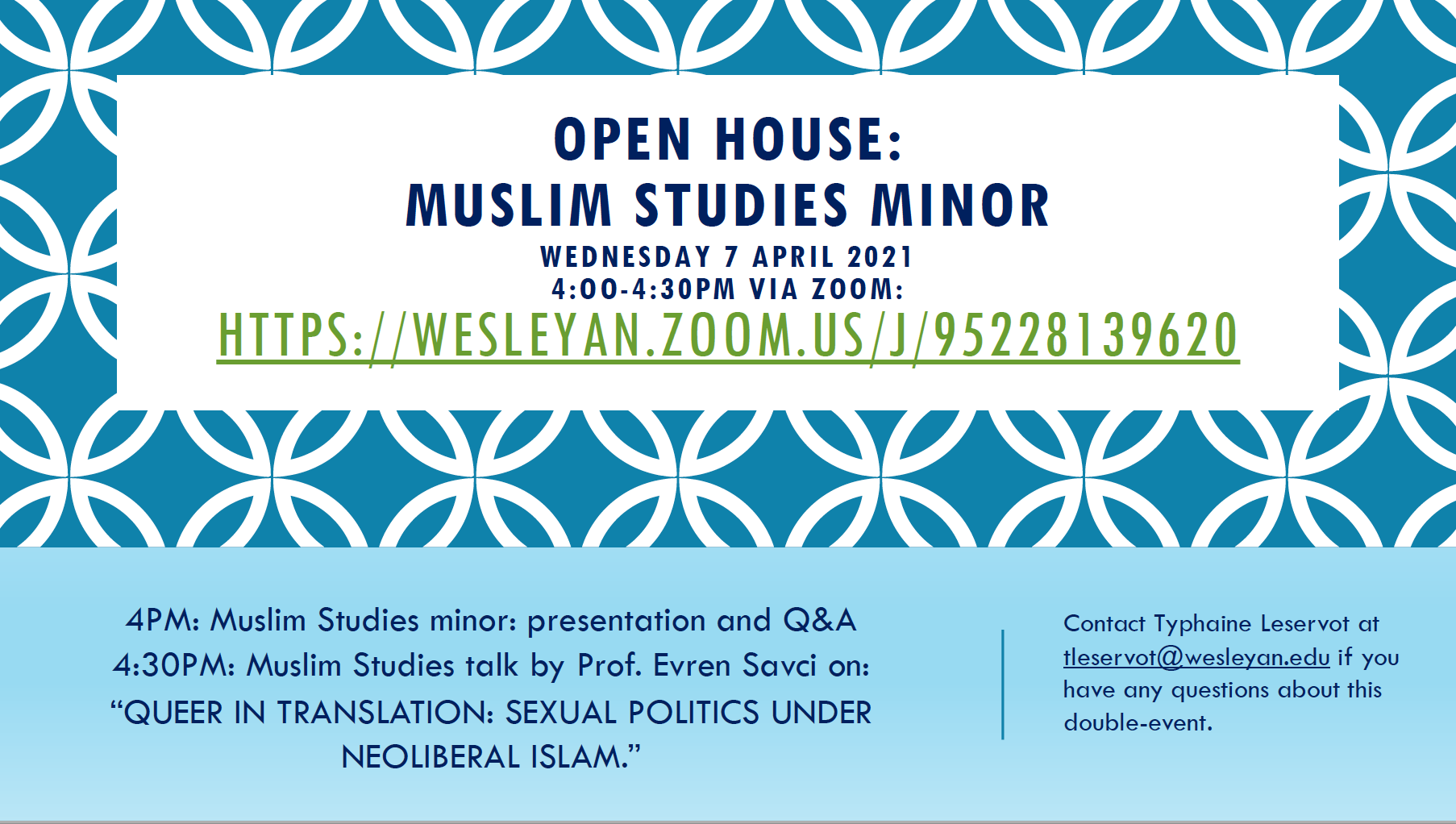 4pm: Come to the open house for the Muslim studies minor;
4:30pm: Stay on for this year’s Muslim Studies talk by Prof. Evren Savci on: 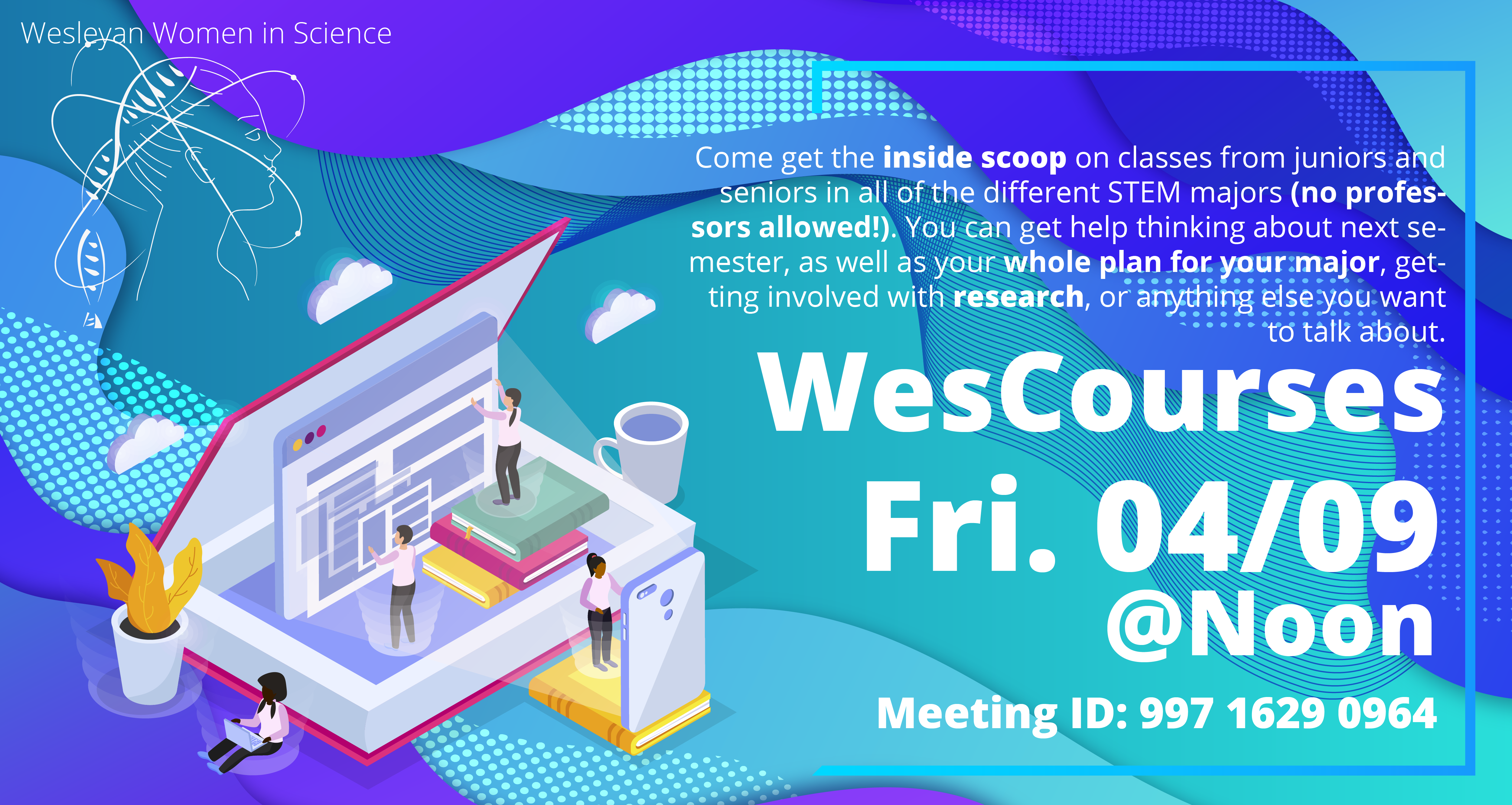 Come get the inside scoop on classes from juniors and seniors in all of the different STEM majors (no professors allowed!) You can get help thinking about next semester as well as your whole plan for your major, getting involved with research, or any other questions you might have. Join Wesleyan Women in Science remotely on Friday, April 8th at noon! All WesWIS events are open to all genders and majors.